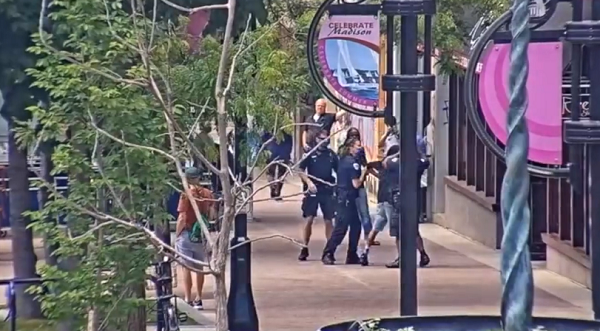 MADISON (AP) – Crowds outside the Wisconsin State Capitol tore down two statues and attacked a state senator amid protests following the arrest of a Black man who was at a restaurant with a megaphone and a baseball bat.

Video released by the Madison Police Department shows the man talking through the megaphone Tuesday while walking near the restaurant’s outdoor patio. He goes inside and says he’s “disturbing” the restaurant.

The Milwaukee Journal Sentinel reports that late Tuesday Democratic state Sen. Tim Carpenter was assaulted after taking a photo of protesters. Statues of Wisconsin’s motto “Forward” and of Col. Hans Christian Heg were dragged away from the statehouse.

“I don’t know what happened … all I did was stop and take a picture … and the next thing I’m getting five-six punches, getting kicked in the head,” Carpenter told a reporter for the newspaper.

The unrest followed weeks of mostly peaceful protests of the death of George Floyd in Minneapolis.

What happened in Madison last night presented a stark contrast from the peaceful protests we have seen across our state in recent weeks, including significant damage to state property.