SUPERIOR, Wis.– At least five bars in Superior, South Superior and South Range have voluntarily shut their doors for the time being after getting notified they’ve each had a customer in their establishment recently who has tested positive COVID-19.

The bar closures come as the health department recorded 30 positive cases in Douglas County since the pandemic began. 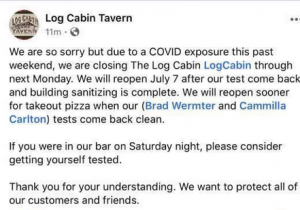 This comes after the last six of Douglas County’s cases came from people who have been at local bars and in many of those cases, the infected people went to multiple establishments.

The bars that have voluntarily announced their closures out of an abundance of caution include Charlie Brown’s Bar, Log Cabin Tavern, Tipsy Beaver Bar, Tavern 105, and President’s Bar.

“We sort of expected to see more cases come but we’ve had a large amount in a really short amount of time and that did kind of take us by surprise how quickly these are all multiplying,” said Kahty Ronchi, Douglas County Public Health Officer.

Ronchi says the bars in town have been working hard to keep proper safety measures in place. She’s encouraging them to review their disinfectant practices. But she says it’s also the responsibility of customers to follow social distancing guidelines. 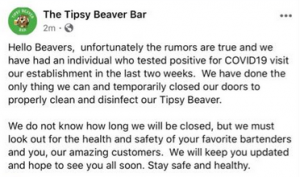 Izzy’s BBQ Lounge and Grill on Tower Avenue hasn’t been affected so far. He has his health guidelines in place and while he isn’t worried about COVID coming from his bar. He is working to figure out his own plan if someone were.

“The only thing that would worry me a little but is if someone had it and came up from out of town and brought it in,” said Isadore Turner II, Owner Of Izzy’s BBQ. “The majority of people who come here I usually know.”

Bargoers like Joel Brekken say it’s tough to see places closing he sees it as a sign that bars are taking the threat of COVID-19 seriously.

“No actually that kind of makes me feel safe if they are taking the precautions and maybe something like this actually hits those places that might have not been towing the line to actually follow the rules,” said Brekken.

Businesses like bars and restaurants can only be forced to shut down by Douglas County if they are not following health guidelines.

If a bar has someone with COVID-19 come in, they can stay open as long as they have proper sanitation guidelines, which the health department says is the case with the closures in Superior.

Ronchi also says just being inside a bar at the same time as someone with COVID-19 doesn’t automatically mean you have it. Anyone who is in close contact with someone for a prolonged period of time should simply monitor their symptoms and get tested if needed.

Nearly $7,000 Worth of Restaurant Vouchers Donated to E.M.S, Police Officers and Firefighters