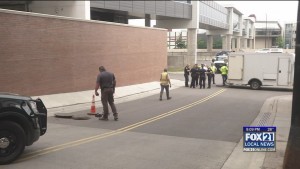 DULUTH, Minn.-Duluth officials are telling us tonight that the naked man who entered the sewers yesterday has been found alive.

City spokesperson Kate Van Daele tells Fox 21 that he was discovered underneath a manhole cover at 5 p.m. today outside of the Wells Fargo building on Superior Street.

The Duluth Fire Department received a call from a person walking in front of the building and heard an individual yelling from a manhole, asking for help.

Duluth Fire responded, was able to lift the manhole cover, and found the naked man in distress.

After placing a ladder down the manhole, DFD was able to retrieve the individual.

The man was taken to a local hospital to be treated for hypothermia and is being held for observation. The Duluth Police Department and Mayo Ambulance also responded.

Authorities first reported the naked man entered the sewer system at some point over the noon hour yesterday.

No One Hurt in Early Morning Virginia House Fire