SUPERIOR Wis.- A popular coffeehouse and bakery in Superior will be shutting it’s doors, but the owner says it’s not going away.

Red Mug Coffeehouse on Hammond Avenue and Broadway will not be reopening in its current location.

A post on their Facebook page said that after being closed down since March, the owner sees no way around closing that location — but intends to reopen in some form or another shortly.

According to the post, the owner will continue to look for a new permanent location. Ideas include a food trailer or truck, wholesale, or possibly an online store, but she’s not sure yet.

She said while time in the old city hall building has come to an end, they are looking forward to the future. 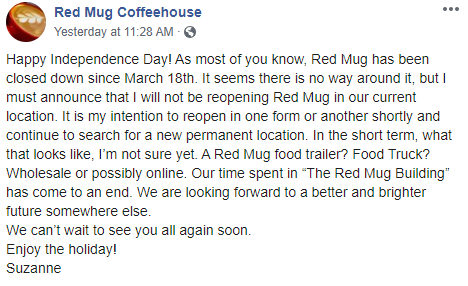