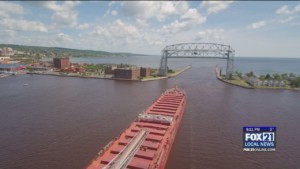 DULUTH, Minn. – Nearly 100 shipping workers have been laid off in Duluth as the pandemic forces three Great Lakes ships to go idle for the rest of the season.

According to the Star Tribune, the 94 employees out of a job are from Duluth-based Key Lakes.

Some shipboard employees could return to work later this year.

A company spokesperson told the paper the Edgar B. Speer, Roger Blough and Philip R. Clarke are expected to be back in service next spring, but it all depends on the demand for steel from automakers and the demand for taconite pellets used to make it.

As of the end of May, the Port Authority says shipments are down nearly 30 percent compared to this time last year in the Port of Duluth-Superior.