SUPERIOR, Wis. — There is growing concern over the rise in COVID-19 cases in Douglas County, and Superior Mayor Jim Paine is speaking out about it and making plans on how to help stop the spread of the virus.

“We are in a crisis in Douglas County. This is very much an emergency and this virus is spreading through our community. And so there are a lot of precautions people need to take in their everyday life,” Paine said Wednesday. 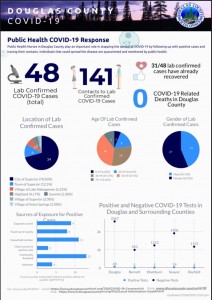 This comes as 11 new positive cases have been reported within the last week in Douglas County bringing the total to 48, which is more than double the number of confirmed cases in the county from nearly two weeks ago after going weeks without any cases.

Two of the confirmed cases are city of Superior employees, according to Paine.

Mayor Paine says the employees have since recovered and returned to work, and he believes there are no current cases within City Hall.

But as FOX 21’s Dan Hanger reports, Paine wants his staff to eventually wear masks on the job, and he even wants a city wide mandate for all public indoor spaces like Duluth is pushing for.

He says masks work to help limit the spread of the virus and it’s his responsibility as the city’s top leader to do all he can to protect the community.

“Public safety is what the city of Superior does. That is our primary mission. And if there are ways that we can make the community more safe — particularly with the advice from experts — we’re going to do that,” Paine said.

Paine is working through some internal logistics before mandating all city employees to wear masks in common spaces like the break room, lobby and at their desks. He says the city wide mandate takes more time in the form of an ordinance that councilors would vote on.

The hope is to have an ordinance crafted in the coming weeks, and he doesn’t believe there’s anything to argue about getting it done.

While City Hall is open to the public, Paine says most city business can be handled over the phone or online, and he’s encouraging voters to request mailed ballots for the upcoming election. Meanwhile, almost all public and city meetings are going back to over the phone or digital only.

Several Superior bars have also been linked to COVID-19 cases in recent weeks. For the latest on that, click here.

Meanwhile, Gov. Tony Evers’ administration has postponed the reopening of the state Capitol building and will require all state employees to wear masks inside of state facilities starting next week.

The Capitol building has been shuttered since March as part of Evers’ plan to slow down the spread of the coronavirus. It had been set to open next Monday, but Evers’ administration announced Wednesday that it will remain closed indefinitely.

The administration also announced that starting Monday, all state employees must wear masks when working indoors in state facilities, including in bathrooms, elevators and parking garages.

Health Officials Are Warning About The Risks Of Social Gatherings

UMD Prepares To Welcome Students In The Fall