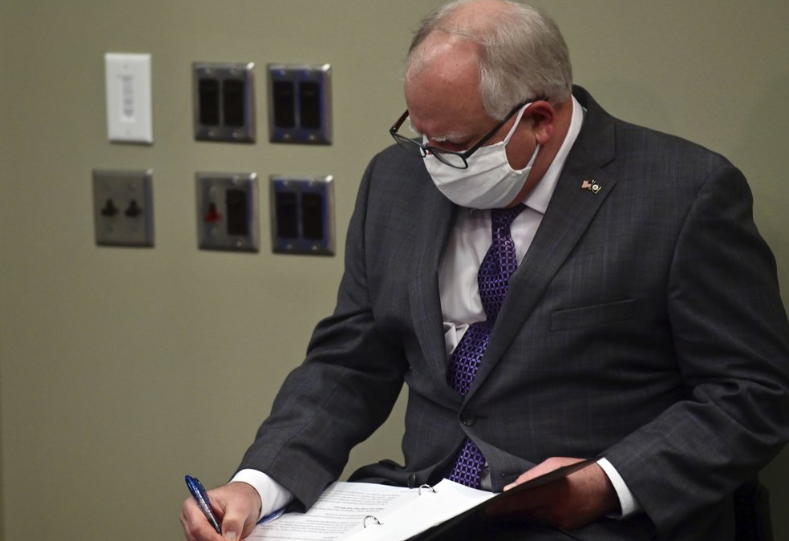 MINNEAPOLIS (AP) — Minnesota’s hospitals have asked Gov. Tim Walz to impose a statewide mask mandate to slow the spread of the coronavirus.

In a letter released Friday, the Minnesota Hospital Association urged the governor to act quickly to protect Minnesota from the surge hitting other states. While hospitalizations in Minnesota for COVID-19 have been declining, the group pointed out that the state’s positivity rate and new case counts are rising again.

“We have a narrow window of time to slow the spread of the virus, so we are asking you to mandate the wearing of face masks statewide as soon as possible,” said the letter from Dr. Rahul Koranne, president and CEO of the association.

Walz told Minnesota Public Radio on Friday he hasn’t made a decision. While the Democratic governor said he’s willing to order a mandate “at some point in time,” he’d like to get Republican support rather than impose it unilaterally. He said he’s watching the state’s positivity rate creep upward, and it makes him nervous.

The Minnesota Department of Health on Friday reported 669 more confirmed cases plus seven deaths, raising the state’s death toll to 1,533. Hospitalization rates remain at some of their lowest since mid-April. The department reported 252 people hospitalized with COVID-19, including 110 in intensive care.