Bald Eagle Attacks Woman Along North Shore: ‘It Was Terrifying’

“He had both of his claws in her. He was trying to get at her with its beak," said Bernie Banks, the man who rescued the woman.

LUTSEN, Minn. — A scary attack between a young bald eagle and a woman took place along Lake Superior Thursday – and it was all caught on video, as FOX 21’s Dan Hanger reports.

The aggressive bald eagle was seen attacking the woman Thursday morning just 100 yards away from the Cascade Lodge and Restaurant along Highway 61 in Lutsen. 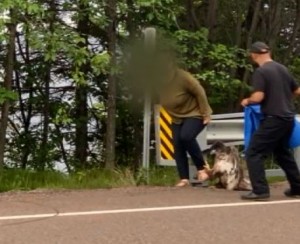 Head Kitchen Manager Bernie Banks ran to help the woman — a guest at the lodge — using his chef’s jacket to safely stop the raptor from charging on.

“I just took off my jacket and threw it over him and tried my best to get him off of her while not hurting the bird or hurting her anymore without me getting hurt, alright,” Banks said.

Banks has seen a wild animal or two from past years living in rural Virginia and Alaska, but he says he’s never seen anything like this.

“It was terrifying. I’m just thankful it was a young bird and not a full grown bird because it was huge and strong. It was something else,” Banks said. 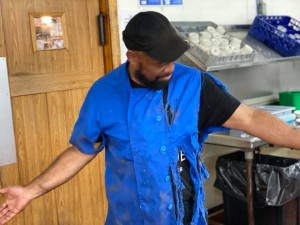 Bernie Banks shows off his chef jacket after he used it to help free a woman from an attacking bald eagle.

The woman was not severely injured thanks in part to the jeans on her legs.

“He had both of his claws in her. He was trying to get at her with is beak. I just happened to top get my jacket over his head in time because he was trying. I think it would have been pretty bad if he would have latched on to her with his beak,” Banks said.

The Cook County Sheriff’s Office and the Minnesota State Patrol were called in to mostly keep onlookers at bay for everybody’s safety, as the eagle — only a few months old — just wouldn’t leave. The bird even roosted on law enforcement’s vehicles.

“We live among the bears and the wolves and coyotes, and apparently these bald eagles that are also taking an aggressive approach this year,” said Thom McAleer, owner of Cascade Lodge and Restaurant.

McAleer says the experience is one he and his wife will never forget, including his guests. 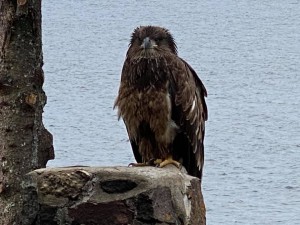 “The COVID restrictions allowed us to create an outdoor space, and this whole thing happened within view of our outdoor dining right across from Lake Superior. Pretty amazing interaction, honestly,” McAleer said.

Experts at Minnesota’s Raptor Center and the National Eagle Center say this eagle could be ill, injured or even unfortunately learning bad behavior from unnatural interactions with humans at such an early age — like being fed. But nobody will know for sure — at least for now — because the bird eventually took off high into the sky — ending one heck of a wild morning during what’s normally a calm time up the shore.

It’s not known what sparked the eagle to attack the woman. She suffered some scrapes through the jeans.

UPDATE: Eagle That Attacked Woman Along the North Shore Transported to Wildwoods