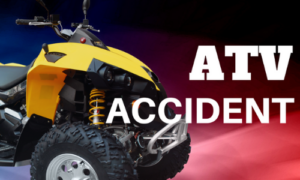 PEQUAYWAN TOWNSHIP, Minn. — Alcohol is believed to be a contributing factor in an ATV accident that left the driver seriously injured.

When deputies arrived, they found the driver —  a 40-year-old man from Two Harbors — unconscious with severe injuries.

He was taken to a Duluth hospital for life-threatening injuries.

The man’s name was not released Sunday.