DECC Board Parts Ways With Executive Director, No. 2 Leader To Retire 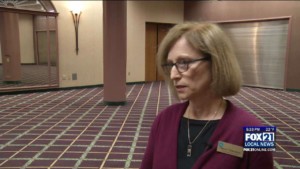 DULUTH, Minn. – A major shake-up is underway at the Duluth Entertainment Convention Center as the DECC’s board is parting ways with its executive director, and the No. 2 person under her has decided to retire.

All of this comes as the DECC is virtually empty and facing a serious financial challenge during the pandemic.

Chelly Townsend told the Star Tribune her contract was not renewed after three years as executive director and 30 years with the DECC.

Board Chair Karen Pionk would not say why Townsend was let go Tuesday because it’s a “personnel matter.”  She did release the following statement:

“The board is working through a transition in leadership. The Board recognizes Chelly Townsend for her many years of service, leadership, and dedication to the DECC. The Board is actively working with Chelly on this leadership transition.”

Meanwhile, the DECC’s director of operations, Joe Tarnowski, will retire in September.

This all comes as board member and former state Senator Roger Reinert has acted as the interim liaison for the last two months between DECC operations and the board while Townsend was out on a leave of absence.

The DECC is a multi-million dollar operation that includes a public board and gets a few million dollars in tourism tax revenue every year from the city of Duluth.

The board will release new details about the DECC’s status and plan for the rest of the year during a Zoom meeting at 7:30 a.m. Wednesday.