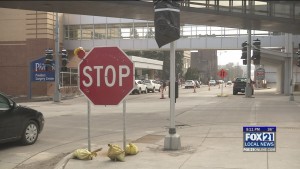 Traffic flow has not been consistent on First Street — with some sections two-way and others one-way.

The city says the change will help cut down on confusion for drivers and improve traffic circulation for the city’s central business and medical districts.

New signage will be up at intersections to help alert drivers of the changes.