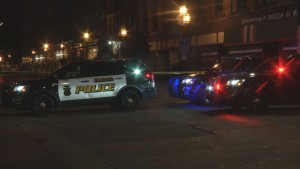 DULUTH, Minn. –  The Minnesota Bureau of Criminal Apprehension (BCA) has identified the Duluth police officer who shot a man during a domestic assault call in downtown Duluth Saturday, Sept. 12.

Officer Tyler Leibfried, a five-year veteran of the Duluth Police Department, is on standard administrative leave pending the outcome of the investigation after discharging his weapon and hitting the suspect in the shoulder.

The suspect, a 23-year-old man of Duluth, was treated at Essentia Health St. Mary’s Medical Center for the gunshot wound and later released into police custody before being booked in the St. Louis County Jail on probable cause of domestic assault.

The man was released Sunday pending possible charges after a case review by the St. Louis County Attorney’s Office.

Duluth police officers responded to the suspect’s apartment at 105 W. 1st Street Saturday evening following multiple 911 calls about a physical domestic incident, according to the BCA.

“Shortly after officers arrived, the officers indicated they heard two gun shots and a witness reported hearing loud sounds from inside the apartment,” according to the BCA in a press release Tuesday night.

Officer Leibfried then discharged his firearm into the door. The shot went through the door and struck the suspect, according to the BCA.

“Based on the preliminary investigation, no shots were fired from inside the apartment. No firearms were recovered at the scene. A hatchet was located just inside the door,” the BCA said.

Portions of the incident were captured on officers’ body cameras.

No one else was in the apartment at the time of the incident, according to the BCA. “The alleged victim in the reported domestic incident had left the apartment before law enforcement arrived. That person was not injured.”

The BCA’s investigation of the officer-involved shooting incident is ongoing. When the investigation is complete, the BCA says it will turn over its findings to the St. Louis County Attorney’s Office for review.

Meanwhile, a spokesperson for the Duluth Police Department confirmed a second officer who was at the shooting is also on leave – voluntarily.