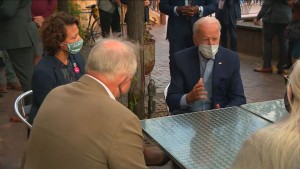 DULUTH, Minn.-Former Vice President Joe Biden has had a busy day in the Northland.

After the Democratic presidential nominee went to Hermantown, where he met with local carpenters, he visited Canal Park to meet with Minnesota Gov. Tim Walz and Duluth Mayor Emily Larson.

We’ll have more on his entire trip, tonight at 9.