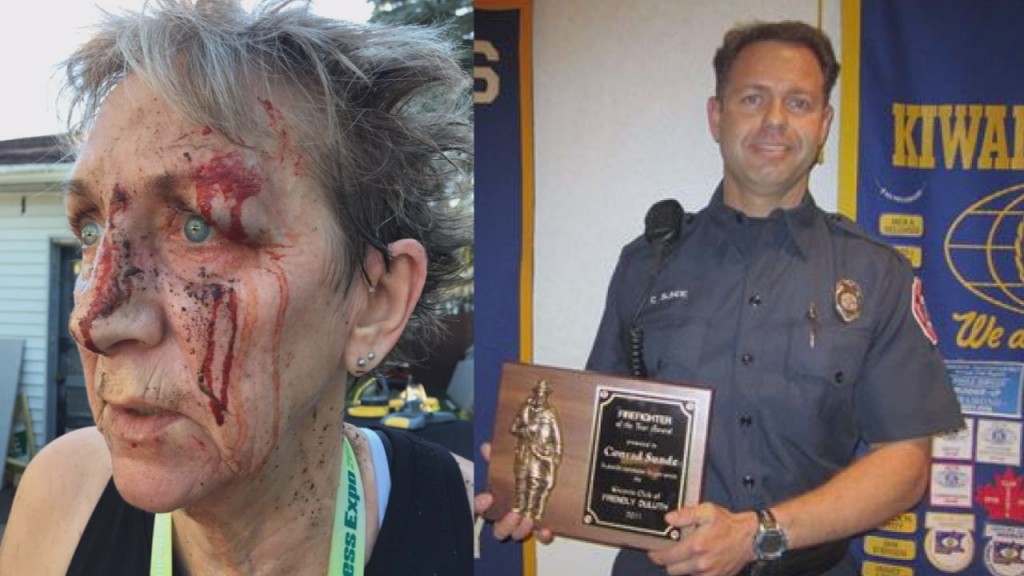 DULUTH, Minn. – A Duluth firefighter placed on a 30-day unpaid suspension this summer after being accused of assaulting a 65-year-old woman on a West Duluth trail, has now been formally charged with multiple felonies – he was previously facing a misdemeanor assault citation for the incident.

Conrad Sunde, 49, was charged this week with first-degree aggravated robbery and third-degree assault.

According to the criminal complaint, on July 10 at 8:00 a.m. Duluth Police Officer Mooers responded to the home of a 65-year-old woman who reported being assaulted on a hiking trail in West Duluth.

When the officer arrived at the home of the victim he observed that the victim had actively bleeding abrasions above her left eye and multiple cuts and scrapes on her body including her knees, wrists, and hands.

The woman told the officer that she was on the trail for her morning run when she was startled by a dog that was not on a leash.

She then told the officer that Sunde was on the trail riding his bicycle with three unleashed dogs in total and when she told Sunde his dogs needed to be leashed he used foul language against her.

According to the complaint, the woman told police that when she went to get her cellphone out to take a picture of Sunde and his unleashed dogs he lifted his bicycle up and charged her with it striking her with the tire which caused her to fall backward onto the ground.

Sunde then got on top of her and “forcefully pushed her head and face into the gravel.”

The woman said while Sunde was on top of her he wrestled her for her cell phone and subsequently threw it into the woods.

The victim was later treated for a nose fracture at a local area hospital.

A spokesperson for the city says Sunde is still on active duty with the Fire Department after serving a 30-day unpaid suspension over the summer.

Sunde is due back in court on November 25.