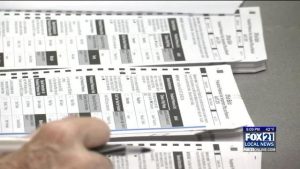 Trump is paying $3 million for the recount in the state’s two biggest and most liberal counties in a long shot bid to erase Democrat Joe Biden’s more than 20,000-vote victory.

The atmosphere inside the convention hall where the Milwaukee County recount is taking place has turned acrimonious and chaotic at times.

Election commissioners have been in almost perpetual session to address a stream of Trump challenges that the county clerk said was slowing the recount to a crawl.