DULUTH, Minn. –  We’re in the final month of a pandemic-ridden 2020 that’s created a lot of pain, unknowns and problems of all types for so many in the Northland. For the Duluth Police Department, the challenge has not only been navigating the virus but facing a record number of shootings — 36 of them this year alone — something Police Chief Mike Tusken hasn’t experienced in his nearly 30 years on the force.

So what’s the problem? Why so many shootings?  And what can we do as a community to help stop gun violence before an innocent person is killed? 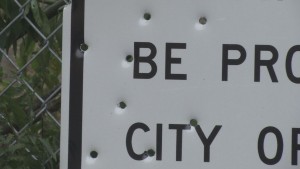 And often times Tusken says witnesses won’t cooperate with police who arrive within minutes.  Not even the victims who are shot speak up — victims Tusken says sometimes end up being suspects in future shootings.

“So this reprisal between different groups and the difficulty of us solving these cases has emboldened some of the people who are acting,” Tusken said.

“Some of the case there’s been just respect – shootings have occurred because of a lack of respect where somebody feels like they’re being disrespected,” Chicos explained.

Chicos says beyond feeling disrespected, suspects are firing guns with no hesitation to solve conflicts over relationships, money and the competing drug market.

“It is very much a form of organized crime where they are run very much like the corporate structure. And again they are money motivated and that drives a lot of this type of violence, this type of conflict between these individuals and these groups,” Chicos said.

The conflicts happen in the form of shootouts on city streets, in alleys, between moving vehicles and at house parties. And the result is bullets ending up all over the place — reminiscent of big-city problems. 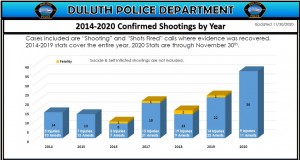 “Nationally you’ve got little kids who have been shot and killed,” Chicos said.

Data released this week from the Duluth Police Department (see graphic to the right) shows an overall rise in shootings over the last four years.  Totals represent homicides by gunfire, non-fatal shootings and shots fired incidents where evidence was collected and suspects took off.  Accidental shootings and suicides are not included.

In 2019 a total of 23 shootings happened, including one fatality.

As of Dec.1, there have shockingly been no deaths out of the 36 shootings in 2020, including one officer-involved shooting that injured a man. 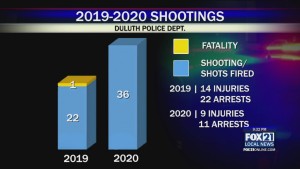 “For a couple of these people it’s the mere fact that they’re five minutes away from a regional trauma center that they’re probably going to get saved, which for them is very fortunate,” Chicos explained.

Essentia Health and St. Luke’s are right in the heart of Duluth — minutes from a lot of these shootings by ambulance and even just blocks from victims who end up taking themselves to the emergency rooms with bullet wounds.

“We’re versed in quickly getting somebody from the ambulance to the emergency department, and upstairs to the operative suite. And you’re right, that’s a capability that I’d say most hospitals in the country don’t have,” Dr. Robinson said.

Dr. Robinson says even the best medical care providers and equipment can’t save everybody from gunshot wounds.

“Sometimes there are shootings where there’s nothing you’re able to do. I mean the person could get shot literally in front of us, and there’s no intervention you could take to save that person’s life,” Dr. Robinson said.

Larson, who spent more than a decade as a social worker at CHUM, believes one facet of this uptick in gun violence is a ripple effect from the pandemic’s challenges on mental health.

And during the pandemic, massive protests and demonstrations erupted across the country after the death of George Floyd under the hands of Minneapolis police — only fueling tension and mistrust with law enforcement — something that is another potential factor in the lack of cooperation from victims in Duluth’s shootings this year. 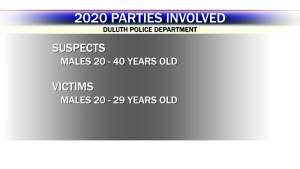 “So we know that right now in our community and communities across the United States that there is and has been a lack of trust by some communities toward police. We understand that can be a contributing factor to not sharing or wanting police to do intervention,” Tusken explained.

Records show suspects and people of interest in this year’s shootings are generally males ages 20 to 40. Victims are mostly males in their 20s.

Tusken says they are not outsiders but rather mostly longtime Duluthians or people who have moved here from other areas who now consider Duluth home.  And Mayor Larson says they definitely are part of this community.

“This degree of isolation and desperation, this degree of anger and willingness to solve that with a gun – that is also part of this community,” Larson said. “It doesn’t mean that we’re going down the tubes or whatever people may or may not want to suggest or throw out. It means that this is an intersection of living in reality that’s happening across the state, across the country, is not unique to us, does not mean it’s not important to us.”

Meanwhile for the police department, investigators are shifting tactics to try to solve these shootings by focusing on forensic ballistic analysis related to firearms, handling more DNA processing of weapons and connecting with so-called “violence interrupters” — people who know and have trust of those connected to shootings who won’t talk to police.

“That’s an incredible challenge because when we look at how we case build, a lot of it is based upon statements from those directly involved, any type of physical evidence we’ve seen,” Chicos explained. “But minus those statements from those people that have first-hand knowledge of this incident, if they’re not willing to cooperate, it provides a lot of challenges for us.” 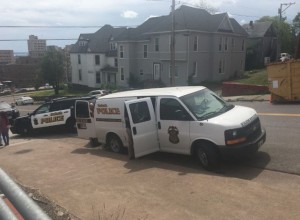 But Chief Tusken believes the city can overcome those challenges with the help of everybody who calls this city of more than 86,000 home.

“I can’t emphasize enough that the eyes and ears of our community have always been our greatest strength,” Tusken said. “It is not just incumbent upon the police department to keep communities safe. It is why we invest so much into our relationship building and our collaboration and partnerships with our community because we ultimately need them in order for us to be successful and keep our communities safe together.”

“It all has the potential to impact any one of us. So that’s why we need to take it seriously,” Chicos said.

So far there are nine gunshot victims for 2020. Eleven suspects have been arrested and are connected to 10 out of the 36 shootings.

Chief Tusken says there is a relatively small population of people in Duluth engaging in gun violence and they are mostly always known to each other in some way.

Tusken stresses to never hesitate to report any type of suspicious activity in your community to give police the opportunity to be proactive rather than reactive to shootings and any other criminal activity.