So far of the 200 pieces of data collected, most are concentrated in the East End and on the University Campus.

SUPERIOR, Wis.-Researchers at the University of Wisconsin Superior are tracking a different kind of waste that is newer in the city this year — personal protective equipment like masks and gloves.

Those researchers said so far without the pandemic, the amount of plastics in the oceans is set to surpass the amount of fish by the year 2050. Now the amount of microplastics coming from PPE waste could speed that up.

“The people are using the mask for protection, that is good, but we need to think in the environment,” said Chemistry Professor Dr. Lorena Rios Mendoza.

The professor-student duo of Dr. Rios Mendoza and Junior Callie Lier has been collecting data of masks, gloves and other PPE littered around Superior.

“So basically I collect, I take a picture or whoever helps takes a picture of the PPE and then I figure out the GPS coordinates of the location where I found it,” Lier said. “There’s a lot of masks, instead of like gloves I guess.”

They then enter that data into a map to illustrate which parts of Superior have the most waste.

“This is very sad, because this is in front of the University,” said Dr. Rios Mendoza, pointing out three pictures of masks dumped right in front of University signs. 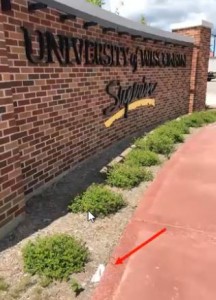 So far of the 200 pieces of data collected, most are concentrated in the East End and on the University Campus.

“You got teachers and stuff and other faculty that are probably more around that are reminding people and then signs around all over the buildings,” said the junior.

Most of the masks found are disposable and made of plastics which break down into microplastics in the environment.

“The idea is to inform the public that plastic is not just garbage. The plastic is a contaminant, it’s a pollutant that is making a lot of damage,” said the professor.

In a lakeside city like Superior, they said, microplastics can spread not only to local rivers and streams, but bodies of water throughout the region.

“Everything that is in the streets you know the people that just dump it, the masks or the gloves, and then everything is going to the river, the river to the lake, and the lake to the ocean,” Dr. Rios Mendoza said.

The pair hopes people adopt more reusable masks. According to Lier, this not only decreases pollution but also the continued production of harmful non-biodegradable materials.

Eventually, they hope to widen their study to include other parts of the Northland, and have the awareness of plastic waste both during the pandemic and in general stretch across the country.

“If we can show the impact of what our town has for, from just this COVID pandemic it’s like then you kinda think what are even bigger cities, what’s the abundance of the masks that are getting thrown out on the streets in even bigger cities,” Lier said.