Video Allowed In Trial Of Officers Charged In Floyd Killing 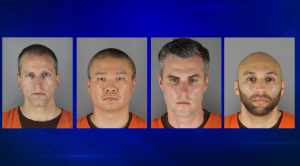 MINNEAPOLIS (AP) – A judge has upheld his decision to livestream the trial of four former Minneapolis police officers charged in the death of George Floyd.

They argued last month that recording audio and visuals of the trial would violate court rules and scare away potential witnesses. A coalition of media organizations, including The Associated Press, has requested camera access.

They argue that cameras would increase transparency, especially during the pandemic. Trial is scheduled for March.