SILVER BAY, Minn. – While many of us are dreading the cold winter months ahead, one Northland woman is embracing the season with a daily morning dip into Lake Superior.

She’s been doing this for the past 63 days.

The method is simple, yet complex. It’s a combination of meditation, breathing exercises, and exposure to the cold that is said to help regulate stress levels, boost the immune system, and improve overall vascular health.

Each morning, she suits up and heads to the lake where she practices holotropic breathing before taking a roughly three-minute soak in Lake Superior.

“While you’re holding your breath, what is so beautiful about that is you feel no need for oxygen at all. You are so rested; it puts you in a state that I have never experienced before,” said Olson-Hohman.

Olson-Hohman says she holds her breath until the urge hits to breathe. She goes through this 3-4 times before or after taking the plunge.

She says instead of taking the plunge in a cold lake, many people begin by taking a cold shower daily.

“We have Lake Superior right here, and you can’t get any colder. I thought, I’ll just go jump in the lake and start with one minute,” said Olson-Hohman.

One day, she spent up to ten minutes soaking in the lake, and that was within her first 30 days of practicing the method.

“It was tough, and I don’t recommend people do that,” said Olson-Hohman. “If you do 2-3 minutes in Lake Superior, it helps your heart, your immune system, cardio. Wim Hof calls it vascular fitness.”

According to Wim Hof, you have to stay in the cold water for at least one minute to reap the benefits of the natural high.

“It does take mind over matter — you just tell yourself to breath and relax. The goal is to relax when you’re in the water, and I can get to that point where it’s relaxing. It then becomes numbing and it’s time to get out of the water,” said Olson-Hohman.

Years ago, she was diagnosed with a slow thyroid. Her doctor offered to prescribe medication, but she declined.

Recently during a routine checkup, Olson-Hohman discovered her thyroid was still low, her cholesterol was elevated, and kidney function was high, but overall she looked healthy.

“Just 28 days into the Wim Hof method, I went back to my doctor, she ran some tests and found my cholesterol has gone lower, my kidney function has improved, and my thyroid problem has diminished,” said Olson-Hohman.

Olson-Hohman says she isn’t sure if the Wim Hof Method is to credit for her improvements, but she does believe in the healing energy of the outdoors.

She says for those interested in taking part in the Wim Hof Method, it’s best to start with a warm shower, eventually turning it colder as the days progress. She also encourages folks to research the method and reach out to others taking part in the practice.

Lake Superior is currently about 37 degrees. Olson-Hohman is 63 days into the method and wants to continue to do it all winter. 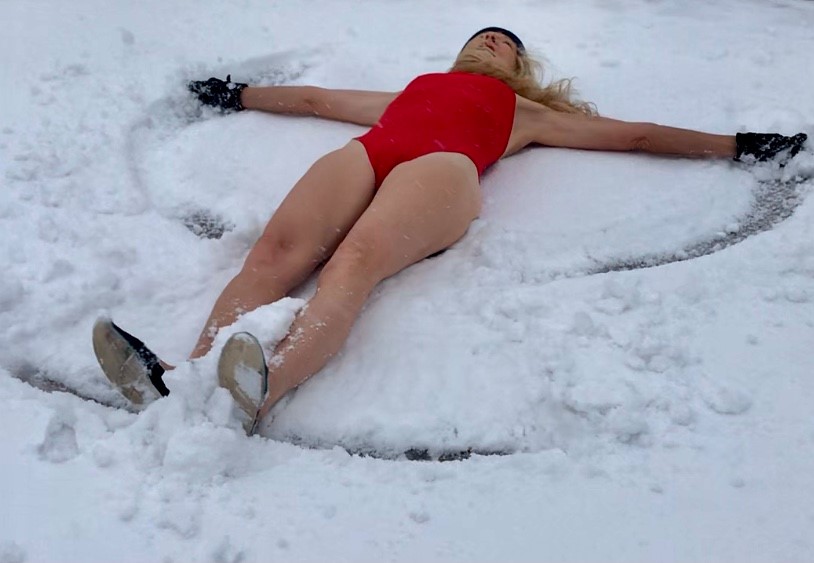