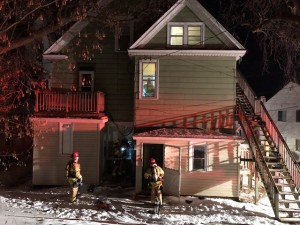 DULUTH, Minn. – The Duluth Fire Department was called to a structure fire around 6 p.m. Sunday – marking the fourth structure fire the department has faced in four days.

The latest fire happened in an apartment building at 1717 East 1st Street.

“When crews first arrived on scene, they saw smoke both inside and outside of the seven-unit apartment building. Residents reported that one of the units was full of smoke. All residents made it outside without injury,” according to a press release from the city of Duluth.

Fire officials believe the fire was centered around an electrical box.

No firefighters were injured.

All residents were relocated for the night by the building’s property management company.

This fire comes after another apartment building caught fire in Duluth’s Lincoln Park neighborhood the night before Christmas Eve, which displaced a dozen residents.