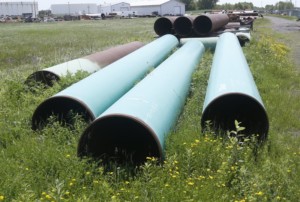 MINNEAPOLIS (AP) – Opponents of a pipeline project that crosses three states have asked a federal court to halt construction in Minnesota on allegations that U.S. Army Corps of Engineers failed to address several environmental issues when it approved a water quality permit.

Two Minnesota Ojibwe bands and two environmental groups filed a lawsuit Thursday that asks for a preliminary injunction to stop work on the Enbridge Energy Line 3 pipeline that began early this month across northern Minnesota.

Line 3 starts in Alberta and clips a corner of North Dakota before crossing northern Minnesota en route to Enbridge’s terminal in Superior, Wisconsin.

The 337-mile line in Minnesota is the last step in replacing the deteriorating pipeline that was built in the 1960s.

Enbridge released the following statement Monday after learning about the lawsuit:

The US Army Corps of Engineers review was very thorough and included robust public participation, including consultation with 30 tribes.

The Corps of Engineers process was reinforced by a contested case at the Minnesota Pollution Control Agency related to the 401 Water Quality Certification, all of which was incorporated by the Corps into the 404 Permit approval.

Replacing the existing Line 3 is an integrity and maintenance driven program, and a $2.6 billion investment in Minnesota’s energy infrastructure. Currently there are over 3,000 men and women from the skilled trades working on Line 3. The workforce will ramp up as construction continues eventually creating over 4,000 family-sustaining, mostly local construction jobs, millions of dollars in local spending and additional tax revenues at a time when Northern Minnesota needs it most.