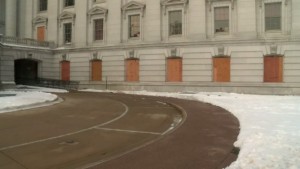 MADISON, Wis. – Windows of the Wisconsin Capitol are now boarded up as the FBI continues its warning to lawmakers around the country about the threat of armed protests and violence directed at government buildings this week and next week.

There’s also been more capitol police in the area since Wednesday’s violence in Washington, D.C.

The Wisconsin National Guard has also been called in.

A number of lawmakers say they’re confident the state is doing everything possible to protect them and they’re going to continue going into the capitol for work — but they’re worried about what’s to come in the days and weeks ahead– especially come Inauguration Day.