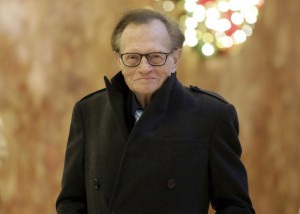 King died at Cedars-Sinai Medical Center in Los Angeles, his production company, Ora Media, tweeted. No cause of death was given, but a spokesperson said Jan. 4 that King had COVID-19, had received supplemental oxygen and had been moved out of intensive care. His son Chance Armstrong also confirmed King’s death, CNN reported.

A longtime nationally syndicated radio host, from 1985 through 2010 he was a nightly fixture on CNN, where he won many honors, including two Peabody awards.

He had many other medical issues in recent decades, including more heart attacks and diagnoses of type 2 diabetes and lung cancer.

Through his setbacks he continued to work into his late 80s, taking on online talk shows and infomercials as his appearances on CNN grew fewer.

Funeral arrangements and a memorial service will be announced later in coordination with the King family, “who ask for their privacy at this time,” according to the tweet from Ora Media.