A total of 110 volunteers were deployed from the 148th, about 10% of their total force.

DULUTH, Minn,- Members of the 148th Fighter Wing have returned to the Twin Ports following their deployment to the Capitol. — part of the 25,000 National Guard troops sent there for President Joe Biden’s Inauguration, to watch out for threats following the violent Pro-Trump riot.

“It was quite crazy to be honest with you,” said Master Sergeant Chris Simonson, Food Service Team Lead.

Since the summer, MSgt. Simonson was going to be part of a small group of National Guard members going to the Inauguration In D.C. “When we learned back in June I was super excited.”

“Like one of those, chance of a career missions to go on, go do a Presidential Inauguration,” he said. “They don’t come along that often.”

But the call became more serious leading up to and after the storming of the capitol by Pro-Trump rioters at the beginning of the month, which took the lives of five, including a capitol police officer.

“And then as everything started happening, after the election and then after January 6th, then started getting, some people started getting a little worried,” said MSgt. Simonson. 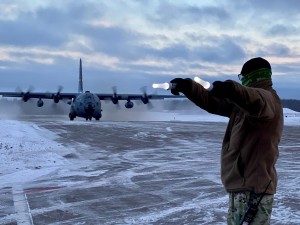 “When it became obvious they were going, the mentality kinda shifted to ‘holy cow, I was kinda thinking that we maybe might go, people asked if I would go.’ and now, ‘we are leaving and we are leaving in two days’,” Col. Curt Grayson, Mission Support Director, said.

A total of 110 volunteers were deployed from the 148th, about 10% of their total force.

“Using our own Minnesota National Guard C-130s we were able to pick our members up here at the 148th, pick them right up here at Duluth and transport them right up to Andrews Air Force Base,” said the Colonel.

Those 110 servicemen had to pack up, make arrangements with family, and ship out in less than 48 hours.

“My wife called me and asked me exactly what I was doing in D.C.?” said Simonson, “but I kinda let her know that we’re not probably gonna be anywhere near the capitol or Downtown D.C., so she was a little more laid back on that.”

Instead, the Food Service team was charged with feeding the 25,000 troops from across the country — a need which also grew as the situation heightened. 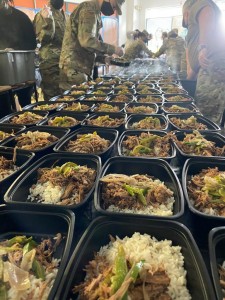 “And that was just for one service period,” he said.

Still he says it was worth it not only to serve at a presidential inauguration, but to help feed his fellow guard members.

“It was the only hot meal they got during the day,” said Simonson. “But everything we heard from down range, Downtown D.C, everybody’s hoping just to get something to eat.”

It’s a big job, that the MSgt. says isn’t always recognized. “Behind the scenes we do a lot of work that’s not noticed,”

“We don’t always get the national attention, you don’t see national or local news sitting where we were,” he said. “They wanted to be downtown where all the troops were” — troops preparing for any threat of any magnitude.

“Was there gonna be the 10,000 people there, frustrated protesters from who knows what side? But what to expect really was the unknown,” he said.

It’s that desire to serve no matter what conditions, Colonel Grayson says, that made so many of the 148th’s men ready to go.

“Really excited to have the opportunity to go out there and do what they joined the Guard to do,” he said.

And some of those guard members, including Master Sgt. Simonson will be heading out in the next few days to Hibbing to help out with COVID-19 testing and eventually vaccination.