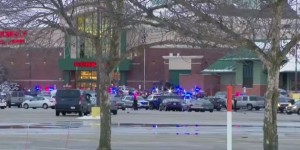 GRAND CHUTE, Wis. (AP) – Police say two people were injured Sunday in a shooting at a Wisconsin mall and the suspect remains on the loose.

Police were called to the Fox River Mall in Grand Chute, a suburb of Appleton, at about 3:30 p.m. Sunday.

Grand Chute Police Officer Travis Waas said two people were injured in the shooting. He said the shooter left the mall before officers arrived. Waas said he didn’t know the conditions of the victims.

Photos from the scene showed officers, some in tactical gear, staging outside the mall and what appeared to be customers walking out with their hands in the air. Grand Chute is a town of about 22,000 about 100 miles north of Milwaukee.

3rd-Degree Murder Count Could Be Reinstated in Floyd’s Death