According to Duluth Fire Crews, no one was injured or displaced from Greysolon.

DULUTH, Minn.- A scare at Duluth’s Greysolon plaza on East Superior Street downtown on Tuesday, after water came gushing into part of the building and out onto the alley behind, a burst water pipe in the Skywalk to blame.

According to Duluth Fire Crews, no one was injured or displaced as a result of this. 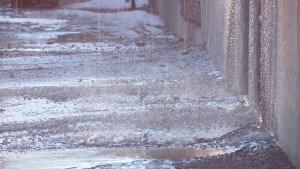 The recent extreme cold, coupled with the sloping hills Duluth is built on, sent water cascading into the heavily used building and the alley.

Officials say the call came in at 4:11 p.m. Five rigs responded — the same as a full structure-fire response.

They found thousands of gallons of water flowing diagonally westward through the Skywalk into the first floor, basement and elevator shafts of Greysolon.

Crews on scene say a pipe leaked in the private parking lot connected to the Skywalk across the street, and with the quick thaw — it burst.

“Just extreme cold, and sorta gets in some places and I think as things start to thaw out, that’s when we start to see problems,” Asst. Fire Chief Brent Consie said.

According to Consie, the damage was pretty contained. “We’ve searched and checked any kind of buildings heading West for any kind of damage and we’ve got nothing.”

The Assistant Chief says one person was stuck in an elevator on the 14th floor, likely due to a short or malfunction in the system. They were removed safely and elevator maintenance was called right afterward. 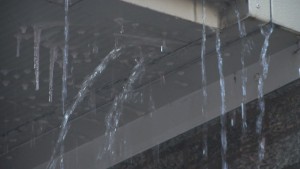 A few residents of Greysolon outside on Tuesday were concerned whether they, and the

building’s many elderly and handicapped tenants could get into their homes. But again, crews said no one from Greysolon was injured or displaced. .

After pumping most of the water out, the Duluth Fire Department handed things off to a private SERVPRO contractor.