Gov. Walz Lays Out Vaccine Rollout Timeline for All Minnesotans to Get First Dose by Summer

ST. PAUL, Minn.– One year ago on February 25, the first Minnesotan was officially diagnosed with COVID-19. Now fast forward to Thursday and Governor Tim Walz is putting out the framework for every Minnesotan to get the vaccine within months.

“This has never been attempted in this country. To vaccinate this number of people at this rate of speed, it’s working,” said Walz. “This is time for us to dig deep and let’s finish this thing.”

The announcement from the governor comes as 1.2 million people have been vaccinated in Minnesota so far.

Walz says at least 70 percent of vaccinations for people 65 and older will be completed by the end of March.

The state will then move on to other vulnerable populations, including those with specific high-risk health conditions. Along with targeted frontline workers like food processing employees in April. 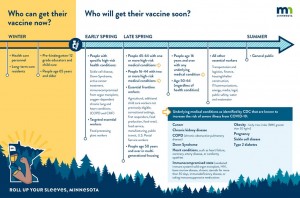 Walz says the plan is to have every Minnesotan eligible for a shot by this summer.

“This is a freeway that’s being built and that freeway is running,” said Walz. “We’re almost done with the health care folks. The seniors, we’re morning up and we’re going to get to 70 percent. That lane will continue on at 65 miles an hour and we will merge in another lane because we have more vaccines and that lane will go on. And as that lane starts to get further and further down the line, we’ll merge more people and this will accelerate.”

Other high risk and targeted essential workers are in line for April and May. This comes as long-term care deaths have dropped by 97 percent in recent weeks. There have also been zero COVID deaths for more than a week in St. Louis County. 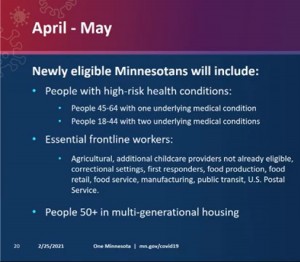 “That takes care of the population that has suffered 90 percent of the deaths in Minnesota and over half of the hospitalizations when we get through that 65 plus population,” said Minnesota Department of Health Commissioner Jan Malcolm.

In St. Louis County, close to 40 thousand people have received the vaccine, 20 percent of the county’s population. As they focus on vaccinating 65-plus, along with education and childcare staff.

“A lot depends on people receiving the vaccine, how quickly we get supply out, how quickly we receive supply,” said St. Louis County Public Health Division Director Amy Westbrook. “Supply is still a big issue.”

With the distribution system getting stronger every day, the governor is confident Minnesotans will be getting the vaccine sooner rather than later.

“This is predicated on our current allocation of vaccines,” said Walz. “Everything I see leads me to believe, it is not going to be less, it is going to be more, which means the timeline moves to the left and accelerates.”

The state’s vaccine estimates are based on vaccine supply from Moderna and Pfizer. But more doses could be on the way soon with as the Johnson and Johnson single-shot vaccine is expected to be approved by the FDA this weekend.