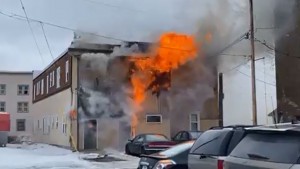 VIRGINIA, Minn. – An apartment went up in flames in downtown Virginia Sunday morning.

Fire officials tell FOX 21 nine residents were inside at the time of the fire.  All got out uninjured, including one of the tenants who needed to be rescued by firefighters.  Two cats were also safely rescued.

The fire was reported around 10 a.m. at 1st Street North and 3rd Avenue, according to Northland FireWire.

The American Red Cross is assisting the displaced residents.

Firefighters from Virginia, Mountain Iron, Eveleth, Fayal, Hibbing, Gilbert, and Pike-Sandy-Britt were all called out to help fight the fire.

The Minnesota State Fire Marshal’s Office is investigating a cause.

We’ll have more on this story tonight on FOX 21 Local News at 9.

Vaccination Clinic to be Held Thursday for Students, Family Members 16 and Older in Eveleth