The Northland Chapter of the Red Cross is assisting those displaced tenants with lodging and necessities.

VIRGINIA, Minn.- An investigation is underway after an apartment building in downtown Virginia went up in flames Sunday morning. All tenants inside the apartment at the time of the fire got out alive without injuries.

The cause of that fire is still under investigation by the state fire marshal. “We ask anybody that has any info to come forward, that has any tips or leads,” Virginia Fire Chief Allen Lewis said. “We do have a number of things we’re following up with at this time.”

At 10:05 a.m, fire crews were called to a burning apartment building on the 200 block of North 3rd Avenue Downtown, with tenants still inside.

“We called out initially multiple surrounding ambulances because we had reports of people trapped and multiple people injured,” said Chief Lewis. “Those reports turned out not to materialize but they all responded.” 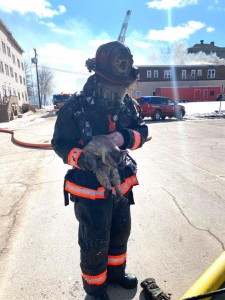 According to the Chief, all 9 residents made it out safely. “They did do a rescue; they pulled a woman from a window because the stairway and the hallway was blocked by fire at that time so we do have a verified life-safety rescue.”

Meanwhile the building burned into the evening. “This structure fire was a stubborn one because it got into the roofing materials,” said Chief Lewis.

“It was a bit of a wind-driven fire too, because of the wind that we have today and the colder temperatures made it difficult too, that’s why the additional fire departments were called in to help with personnel,” he said.

10 additional Iron Range fire departments assisted in the call — sending crews up ladders to combat the flames from above, and inside with hoses and tools.

“This is a very old building. It’s pretty heavy construction, it’s well constructed,” said the Chief. “So it did give us time to go inside and do some firefighting that we needed to get done.”

“But contents are very flammable and as you can see, it’s been a long time,” he said.

And in that time, the homes the 9 tenants occupied in the building burned away.

“The gentleman I was talking with just a minute ago had his slippers and pants and a jacket and that’s it. He didn’t have his cell phone, he didn’t have his billfold, he lost absolutely everything,” she said. “And that’s a majority of them.”

The Northland Chapter of the Red Cross dispatched volunteers to help with food, clothing and lodging and other parts of the lives now turned upside down.

“What we give them is 48-hour instant care,” said Frederickson. “We have nurses that help them out, they’ve lost their medicines so they need help with that.”

“So we work with a group of people to help those people get back on their feet,” she said.

This winter has been busy for aid programs like the Red Cross, with structure and house fires flaring up across the Northland. “This winter’s been terrible,” said Frederickson.

Most recently, two homes in Virginia catching fire just on Friday. “One of those that we had was, we believe started by a heating device, another one was smoking materials,” Chief Lewis said.

The Chief is stressing now more than ever the importance of proper fire safety. “Smoke alarms save lives, Carbon Monoxide detectors save lives, make sure you know two ways out,” he said.

If you want to do something to help those displaced tenants, Frederickson said, you can donate to the Red Cross or agencies like United Way and Salvation Army