The bill provides direct payments of up to $1,400 for most Americans, extended emergency unemployment benefits, and more. 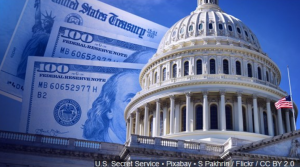 WASHINGTON (AP) — An exhausted Senate narrowly approved a $1.9 trillion COVID-19 relief bill Saturday as President Joe Biden and his Democratic allies notched a victory they called crucial for hoisting the country out of the pandemic and economic doldrums.

After laboring through the night on a mountain of amendments — nearly all from Republicans and rejected — bleary-eyed senators approved the sprawling package on a 50-49 party-line vote. That sets up final congressional approval by the House next week so lawmakers can send it to Biden for his signature.

The bill provides direct payments of up to $1,400 for most Americans, extended emergency unemployment benefits, and vast piles of spending for COVID-19 vaccines and testing, states and cities, schools and ailing industries, along with tax breaks to help lower-earning people, families with children and consumers buying health insurance.

$300 weekly emergency unemployment checks — on top of regular state benefits — would be renewed, with a final payment made Oct. 6. There would also be tax breaks on some of those payments, helping people the pandemic abruptly tossed out of jobs and risked tax penalties on the benefits.

The House’s relief bill, largely similar to the Senate’s, provided $400 weekly benefits through August. The current $300 per week payments expire March 14, and Democrats want the bill on Biden’s desk by then to avert a lapse.