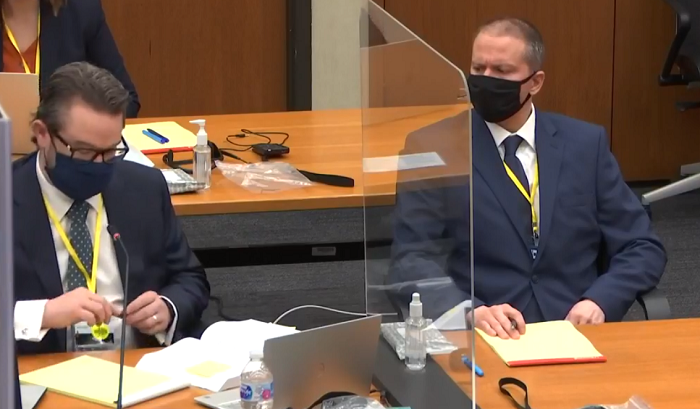 MINNEAPOLIS (FOX 9) – Hennepin County Judge Peter Cahill has ruled jury selection in the Derek Chauvin trial for the death of George Floyd can move forward Monday morning despite the unresolved issue of a third-degree murder charge in the case.

Chauvin’s attorney, Eric Nelson, told the court he intends to file a petition for the Minnesota Supreme Court to review the Court of Appeals opinion that came in late last week.

Neither of the family courtroom seats was in use by Floyd or Chauvin family members or supporters for the start of court Monday morning.  Chauvin was the last trial party member to arrive, ushered in by his attorneys. Minnesota Attorney General Keith Ellison has joined his three prosecutors at their table and appeared to be listening intently to arguments about whether the Chauvin trial can proceed while the third-degree murder charge is appealed.

The Minnesota Court of Appeals ruled on Friday that Cahill must reconsider reinstating the third-degree murder charge against Chauvin.

“The district court therefore erred by concluding that it was not bound by the principles of law set forth in Noor and by denying the state’s motion to reinstate the charge of third-degree murder on that basis,” read the order.

Protests and marches in Minneapolis

On the eve of the Derek Chauvin murder trial, hundreds of activists and protesters took to the streets of Minneapolis for a march and demonstration. The march was led by a white casket, which organizers say represents those killed by police.

Protests are planned almost daily in Minneapolis, while the city has spent around $1 million securing the Hennepin County Government Center where the trial is taking place. Organizers say at least some of them will start to gather around the government center Monday morning at dawn. Organizers say they prepared for a long day of protests on the first day of jury selection.

George Floyd, 46, died on May 25, 2020, while being detained by Minneapolis police officers Derek Chauvin, Tou Thao, J. Alexander Kueng, and Thomas Lane at the intersection of 38th Street and Chicago Avenue. The intersection has remained closed to traffic since Floyd’s death and has been dubbed George Floyd Square.

A widely-shared video taken by a bystander showed Chauvin kneeling on Floyd’s neck for nearly nine minutes while he repeatedly cried, “I can’t breathe.”

The Hennepin County Medical Examiner’s report ruled the death of George Floyd a homicide. The updated report stated that George Floyd experienced a cardiopulmonary arrest while being restrained by law enforcement.

To decide the jury, prosecutors and Chauvin’s defense attorneys will question each potential juror one at a time, separately from the others.

Each potential juror has already filled out a questionnaire asking about their knowledge of the case, police connections, and attitudes towards the justice system as well as their media habits, which will be provided to the attorneys and the judge before jury selection.

The jury will be partially sequestered during the trial and fully sequestered while they are deliberating, which means they cannot go home until they reach a verdict or the judge determines they are hung.  However, the judge can order full sequestration of the jury at any time if the partial sequestration proves ineffective in keeping the jurors free from outside influence.

Opening statements in the trial are scheduled to begin on March 29. A verdict in the Chauvin trial is not expected until mid to late April.

Who will be in the courtroom?

Courtroom 1856 was renovated specifically for the Derek Chauvin trial to maximize capacity and maintain COVID-19 social distancing standards. The courtroom is located on the 18th floor of the Hennepin County Government Center.

Judge Cahill has ordered certain behavior in the courtroom:

Jurors, attorneys, witnesses, and support staff must wear masks and keep six feet from other people.

Masks can be removed when giving testimony, examining witnesses, giving opening statements, or closing arguments. Attorneys must conduct all witness examinations and arguments from the lectern.

Any sidebar conferences will be conducted over wireless headsets. Chauvin will be outfitted with a headset to listen to these conferences, which will be off-the-record.

Jurors and potential jurors will be escorted to the courtroom each day by deputies or security. No one can have contact with jurors except the judge, court personnel, and deputies. Any attorney contact is limited to the jury selection process when court is in session.

Potential jurors will only be referred to by a randomized number.