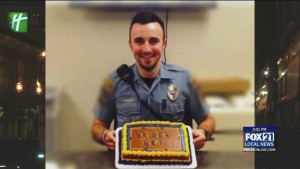 2015 photo on City of Rosemount’s website congratulating Officer Tyler Leibfried on his new job with the Duluth Police Department.

DULUTH, Minn. – St. Louis County Judge Sally Tarnowski has denied a Duluth police officer’s request to dismiss charges against him in a shooting that injured an unarmed man.

Tyler Leibfried, 28, is facing two felony firearm charges, including one of reckless discharge.

Leibfried was responding to a possible domestic incident last September in downtown Duluth when he mistakenly thought he heard gunshots through an apartment door, according to the criminal complaint.

He’s accused of firing four shots into the door nearly 10 seconds after hearing the bangs and then firing another two shots six seconds after the victim is heard yelling to stop after being hit once in the back, according to court records.

“The Court recognizes the myriad dangers inherent to the job of a police officer. The Court respects the immense difficulties raised by split second decisions in circumstances where the lives of citizens and the lives of officers are in danger. However, based upon the Complaint and the record before it, the Court concludes that Defendant’s motion to dismiss must be denied. The law requires the Court to acknowledge that the State is alleging Defendant’s conduct was not objectively reasonable and to recognize there is sufficient evidence in the record to require the jury to make the determination as to whether the officer’s conduct was reasonable or not under the circumstances confronting him. Defendant’s Motion to Dismiss for Lack of Probable Cause is DENIED.”

Judge Tarnowski’s decision to continue with the charges in the case comes after St. Louis County Attorney Mark Rubin concluded the officer was fueled by fear and made an unlawful judgment to shoot, and based on the law Rubin believes the officer was negligent in his decision making to use deadly force, especially when a second officer who also heard gunshots retreated and never fired his weapon.

Leibfried remains “off duty indefinitely” after an internal Duluth Police Department review concluded his actions went against policies and training.

This is the first time a Duluth police officer has been charged for firing a weapon on the job.

A settlement conference is scheduled for April 15 at 3:40 p.m.