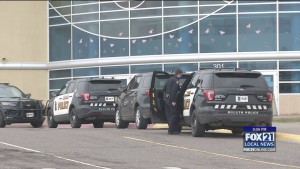 DULUTH, Minn. – The student accused of bringing ammunition to Duluth East High School and forcing a lockdown there is now charged with a felony.

The 16-year-old boy, who authorities previously said was 17 in error, was in the Arrowhead Juvenile Center Wednesday charged with “possession of ammunition by a minor,” according to St. Louis County Attorney Mark Rubin.

Rubin said the case will be handled in Juvenile Court.

The teen was arrested Tuesday after officials say the loaded magazine with 9-mm ammunition was found in the student’s locker during a search for a vaping device.

A gun was never located.

School resumed after the hour-and-a-half lockdown.