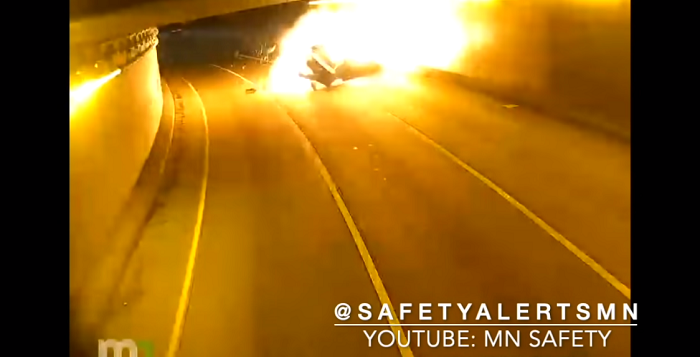 MINNEAPOLIS (AP) — Two people are dead and a third is hospitalized after a fiery crash in an interstate tunnel near downtown Minneapolis.

The State Patrol says the car was traveling at a high rate of speed Sunday night when it struck a concrete median wall, which caused the fuel tank to rupture and the car to burst into flames in the Lowry Hill Tunnel along Interstate 94.

Video shows the car entering the tunnel and smashing into a wall, causing a flash of fire at about 9:40 p.m. The car becomes engulfed in flames and skids to a stop as the tunnel fills with smoke.

The 24-year-old Minneapolis man who was injured was taken to Hennepin County Medical Center. The two people who died have not been identified.

The crash closed the freeway for several hours.