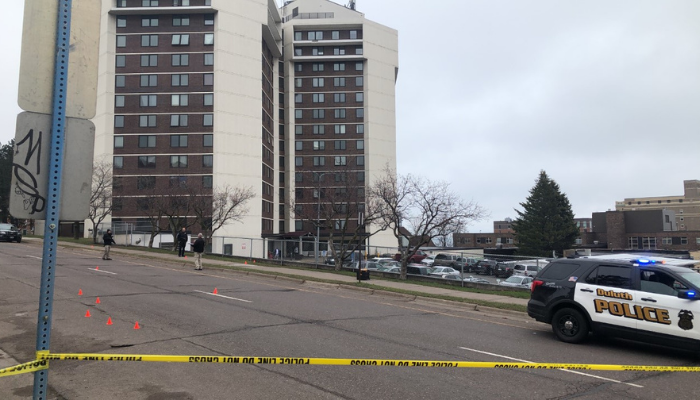 Police say they received reports of hearing multiple gunshots just before 8:00 a.m. and that a male had been shot.

When officers arrived at the scene on the 200 block of East 3rd Street they did not locate a victim but found multiple casings as well as a vehicle that had been struck by bullet fragments in the Tri Towers parking lot.

According to reports, Duluth police say they received “numerous reports” that the victim was taken to a local emergency room however the male did not enter the hospital upon arrival and walked away without going inside.

“The Duluth Police Department takes shootings very seriously,” Major Crimes Lieutenant Dan Chicos said. “We investigate shootings not only to ensure public safety but also to end senseless violence. Tonight, we are asking for the public’s help in providing information about this situation so that we can bring peace and an end to this investigation.”

Authorities say anyone with additional information regarding the shooting is asked to call the Violent Crimes Unit at 218-730-5050.

The extent of the person’s injuries is unknown at this time.

Authorities say witnesses to the incident told police that the person who was shot “left the scene on their own volition.”

According to police, they are continuing to investigate and identify all parties involved in the shooting that happened around 8:00 a.m. in the location of 2nd Avenue East and 3rd Street.

The police are asking that anyone with additional information in connection to the shooting incident call the Violent Crimes Unit at 218-730-5050.

Vista Fleet Returns to the Water