Duluth Mayor Emily Larson said a proposed $24 million capital investment plan will take the city-owned attraction to its true potential, which includes adding hundreds of new jobs, six times the number of visitors and increasing the economic impact of more than $10 million.

“We have a history of taking on big issues and we work the problems for the right solutions, and now it is time to do that with Spirit Mountain,” said Larson said at a news conference at Spirit Mountain Thursday.

Larson laid out her vision based on a task force’s recent report and recommendations to make Spirit Mountain sustainable. Click here to read the full release. 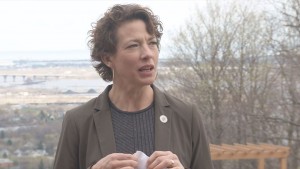 The capital project would include renewing winter skiing and riding infrastructure to provide a better service at a lower cost for visitors, completing the Nordic skiing and mountain biking trail systems, expanding summer Adventure Park activities to include a high ropes course, along with renewing the deteriorating Skyline Chalet and campground infrastructure.

“I really don’t want to do any more Band-Aids,” Larson said. “It is time for a good fix, and there’s a saying that, actually, we talk a lot at my house — that if you can’t get out of it, get into it.”

Other improvements include food and beverage upgrades, a better guest experience, overhauling the 1970s electric and lighting system, and better connecting Spirit Mountain to nearby city and state rec facilities like the Lake Superior Zoo and Munger Trail.

Newly hired Executive Director Ann Glumac believes Spirit Mountain’s vision 47 years ago has never fully been accomplished the way it can be.

“I think by creating the task force, by taping the wisdom that exists with expertise within our community, we have started to create this community wide vision for what we can and should be,” Glumac said. 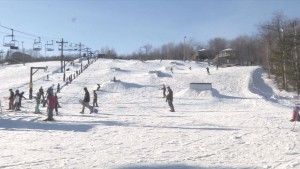 If all goes as planned, the city expects the $24 million investment to increase Spirit Mountain’s economic impact from around $22 million to nearly $40 million annually; visitors would increase from 50,000 to 300,000 a year and roughly 200 additional jobs would be created.

The city cannot easily sell Spirit Mountain because it was developed with federal and state taxpayer dollars to be government-owned by the city of Duluth.