HERMANTOWN, Minn. – A police pursuit that began in Superior on Tuesday evening ended in a two-vehicle crash in Hermantown with multiple injuries.

According to the Superior Police Department, officers attempted to stop the 25-year-old male suspect around 6:00 p.m. Tuesday that was involved in an assault that landed an adult male in the hospital.

Authorities say the suspect is a known felon with pending firearm charges and was believed to have an “unwilling” passenger in the car. 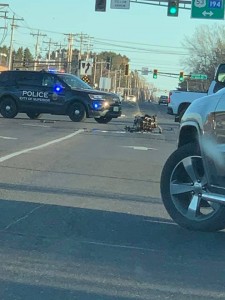 An engine from one of the vehicles was sitting in the intersection after the crash. Photo courtesy of Zach Herrick.

While attempting the stop, the suspect began a vehicle pursuit over the Blatnik Bridge to Duluth in the area of the Miller Hill Mall.

According to reports, while pursuing the suspect vehicle other agencies were notified of the pursuit and Superior police officers terminated their involvement.

Shortly after, the suspect vehicle crashed into another vehicle at the intersection of Haines Road and Highway 53.

Superior police witnessed the crash and provided aid to those involved until local law enforcement arrived at the scene.

The suspect fled on foot and was later located by Hermantown police.

The passenger in the suspect vehicle confirmed to police that she was not a voluntary passenger and had asked the suspect multiple times to be let out of the car.

The occupants of the other vehicle involved in the crash were transported to a local hospital for their injuries.

Their conditions were not known as of Wednesday evening. Law enforcement did not identify how many occupants were injured in the crash.

The crash is being investigated by the Minnesota State Patrol because the crash occurred in the city of Hermantown.

Charges for false imprisonment and felony fleeing, along with other charges related to the assault earlier in the day are being referred to the Douglas County District Attorney.