The suspected shooter is a 17-year-old male from Duluth. 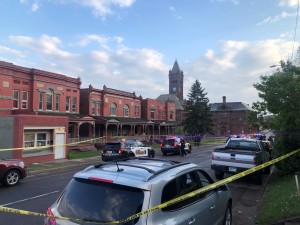 DULUTH, Minn. –  A man who was seriously injured during a shooting in Duluth Saturday has died, making his death the city’s first homicide of 2021.

A spokesperson for the city said the victim is a 22-year-old male from Duluth.   His name was not released Sunday pending notification of family members.

The suspected shooter is a 17-year-old male from Duluth who was taken into custody Saturday and booked in the Arrowhead Juvenile Center on a preliminary charge of 2nd-degree murder.

The shooting happened around 7 p.m. Saturday on the 100 block of East 3rd Street in Duluth.

Details surrounding a possible motive were not known Sunday afternoon.

“This incident is still under investigation by the Duluth Police Department. Duluth Police are asking for the public’s help in collecting additional information from this incident. To provide information, please call 911 or 218-730-5050, which will connect you to the Violent Crimes Unit,” said Kate Van Daele, the city’s public information officer.  You an also file an anonymous tip online.

“The Duluth Police Department will provide additional information on this case, including the victim’s name, as soon we are able,” Van Daele went on to say.

So far this year, Duluth has seen 14 shooting incidents.

In 2020, the Duluth Police Department recorded 41 shooting incidents with criminal intent – the highest number every recorded in the city in a single year. In 2019, Duluth recorded 23 shootings.

Man Jailed in Fatal Crash at Minneapolis Rally Has Past DWIs