No one was hurt from the fire, and fire officials say that's due in large part to the Purple K Dry Foam unit.

The call came in about 20 minutes before midnight. Superior firefighters who were off-duty at the time needed to be called in to cover any possible calls elsewhere in the city that night. 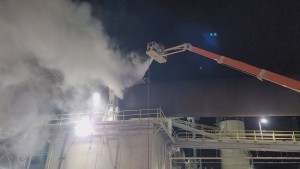 Crews needed to use a lift to reach the fire. Photo: Camron Vollbrecht

According to officials, the fire involved a “combustible liquid” inside a part of the facility’s equipment — meaning water could’ve made it worse.

So they used the Department’s industrial firefighting “Purple K” unit.

It sprays a dry foam chemical similar to a regular fire extinguisher. But the equipment is much heavier at 500 pounds, with a long hose to keep firefighters a safe distance away.

No one was hurt from the fire, and officials said that’s due in large part to the Purple K unit, which comes from a partnership with Cenovus Energy.

“Last night would’ve been extremely difficult dragging up a dozen handheld extinguishers to do the job of one thing here,” said Battalion Chief Camron Vollbrecht, recounting how crews needed a lift to reach the fire.

“Safer for our firefighters, they were able to use a hose from far away as opposed to being up close with an extinguisher,” he said.

According to Vollbrecht, if you’re using equipment which contains a combustible liquid at home (like a lawn mower), make sure you let it cool down before refueling.

He said Graymont’s equipment didn’t suffer from severe damage and it was just a lubricating oil that had burned. The facility was back open and running Sunday.

Hillside Makers Market is Back