Smoke from the fire and aircraft activity could be noticeable in the area especially along Highway 169/Highway 1 between Tower and Ely. 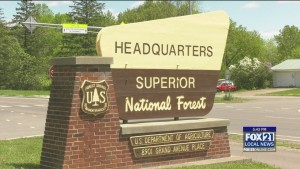 DULUTH, Minn.- A lightning strike is believed to be the cause of a fire in the Boundary Waters Canoe Area Wilderness (BWCAW), estimated at roughly 2 acres.

According to the U.S. Forest Service, late in the day on June 4th, a wildfire was detected southwest of Hassel Lake in BWCAW on the LaCroix Ranger District of the Superior National Forest. Hassel Lake is located west of Crab Lake and Burntside Lake and approximately 10 miles northeast of Tower, MN.

The fire is believed to be caused by a lightning strike.

An aircraft flight was taken over the fire for a size up of the fire’s activity and location. Moderate fire activity was witnessed in a mixed Boreal forest with aspen, pine, and balsam fir tree species.

The fire is currently located away from any lakes or portages so access on the ground is extremely difficult and currently not safe for firefighters. Fire suppression actions are being taken by water dropping aircraft.

The safety of firefighters and the public are the highest priority, officials said, and therefore it is currently not safe to put firefighters on the ground at this time. This fire is in an extremely challenging location for firefighter access.

Smoke from the fire and aircraft activity could be noticeable in the area especially along Highway 169/Highway 1 between Tower and Ely.

There are currently no Forest Closures, but a Wilderness Public Safety Crew will travel into Crab Lake on Saturday morning to contact visitors and post notices on portages in the area.

Landscapers Try to Keep Up With Business

Fire Danger Warnings in the Northland