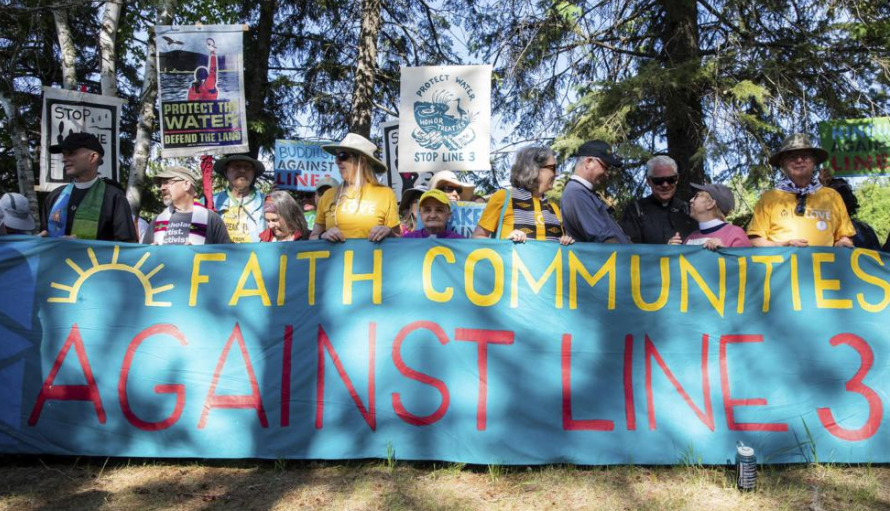 SOLWAY, Minn. (AP) — Hundreds of protesters chanting “Stop Line 3!” and “Water is life!” gathered at the headwaters of the Mississippi River in northern Minnesota on Monday, vowing to do whatever it takes to stop a Canadian-based company’s plan to replace an aging pipeline that carries oil from Alberta to Wisconsin.

“This is important. This is what we need,” actress Jane Fonda told The Associated Press, motioning toward the crowd as she held signs with President Joe Biden’s image that said, “Which side are you on?”

Enbridge says the 1960s-era Line 3 pipeline is deteriorating and can run at only about half its original capacity. It says the new line, made from stronger steel, will better protect the environment while restoring its capacity and ensuring reliable deliveries to U.S. refineries.

More than 300 groups delivered a letter to Biden last month calling on him to direct the Army Corps of Engineers to suspend or revoke Enbridge’s federal clean water permit for the project. They urged Biden to follow the example he set on the first day of his administration, when he canceled the disputed Keystone XL pipeline, citing worries about climate change.

Biden has not taken a stand on Line 3, and Minnesota Democratic Gov. Tim Walz is letting the legal process play out.

But Biden’s administration has declined to shut down the Dakota Access pipeline, which is owned by a different company and was the subject of major protests near the Standing Rock Indian Reservation in the Dakotas in 2016 and 2017.

In Michigan, Enbridge is defying an order by Democratic Gov. Gretchen Whitmer to shut down its Line 5 because of the potential for a spill in a channel linking two Great Lakes.

Enbridge is gearing up for a final construction push on the Line 3 pipeline, which clips a corner of North Dakota on its way across northern Minnesota to Enbridge’s terminal in Superior, Wisconsin. The Canadian and Wisconsin replacement segments are already carrying oil. The Minnesota segment is about 60% complete. The company has said it plans to put the line into service late this year.

Protesters said the “Treaty People Gathering” was the largest show of resistance yet to the project.

Protesters used a boat on a trailer to block the entrance to an Enbridge pump station south of the main protest site, and about two dozen chained themselves to construction equipment, Minnesota Public Radio News reported. A Border Patrol helicopter hovered about 20 feet (6 meters) off the ground, blowing up sand and dirt, to try to get protesters to leave.

Enbridge said that 44 workers left the site in an effort to de-escalate the situation. In a written statement, the company said:

The damage done today by protesters is disheartening. We respect everyone’s right to peacefully and lawfully protest, but trespass, intimidation, and destruction are unacceptable. Our first priority is the safety of all involved – our workers, men and women in law enforcement and the protestors themselves. Today 44 workers were evacuated from the site, including ten employees of Native owned contractor Gordon Construction from the White Earth Reservation. Over 500 native workers are part of the Line 3 workforce. The project is already providing significant economic benefits for counties, small businesses, Native American communities, and union members – including creating 5,200 family-sustaining construction jobs, and millions of dollars in local spending and tax revenues.

We hoped all parties would come to accept the outcome of the thorough, science-based review and multiple approvals of the project. Line 3 has passed every test through six years of regulatory and permitting review including 70 public comment meetings, appellate review and reaffirmation of a 13,500-page EIS, four separate reviews by administrative law judges, 320 route modifications in response to stakeholder input, and reviews and approvals from the Minnesota Public Utilities Commission, Minnesota Pollution Control Agency, Minnesota Department of Natural Resources, the U.S. Army Corps of Engineers, the Bureau of Indian Affairs, and the Fond du Lac Band of Lake Superior Chippewa (The only Tribe with “Treatment as a State” water quality authority along the pipeline route).

In fact the leadership of the two reservations crossed by current Line 3 have repeatedly expressed their support for Line 3’s permits. Many of the groups involved in the Treaty People Gathering were parties to the review process…and during the past six years have repeatedly provided input that was heard and acted upon.

Both sides are awaiting a ruling from the Minnesota Court of Appeals on a legal challenge by environmental and tribal groups that want to overturn state regulators’ approval of the project. The court is expected to rule by June 21 on whether Enbridge adequately proved a long-term need.