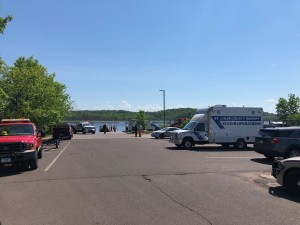 DULUTH, Minn. –  The body of a man who tried to save two children from drowning, which included one of his own, was found off Boy Scout Landing Wednesday evening on the St. Louis River, according to the St. Louis County Sheriff’s Office.

The call came in at about 1:55 p.m. when the two girls, 5 and 8 years old, went under when swimming near a sandbar. Ingles went after them, but never came out.

According to a press release from the Sheriff’s Office, people who happened to be near the scene at the time were able to help rescue the two children to shore, including a boater.

The St. Louis County Sheriff’s Office and Rescue Squad, the Duluth Fire and Police Departments, the Mayo Ambulance and the U.S. Coast Guard all worked together at the scene.

(A previous version of this story said the victim was the father of both children, but he is in fact the father of only the 8-year-old girl.)

Access Again an Issue at Federal Trial in Floyd's Killing