Formal charges are still pending for the Duluth man police say randomly shot and killed Ed Ward in a doorway in St. Cloud.

DULUTH, Minn.- A weekend homicide in St. Cloud now has two close connections to Duluth. The alleged suspect lives here, as well as the daughter of the victim who was a longtime college professor. 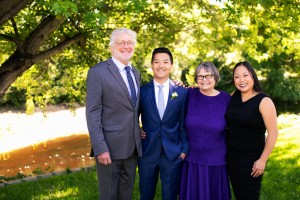 68-year-old Ed Ward’s daughter says her family is grieving the loss of her father — a kind and compassionate man.

Formal charges are still pending for the Duluth man police say randomly shot and killed Ward in a doorway in St. Cloud.

“I heard a bang,” said nearby resident Harry Levendowski. “It’s just a noise that well maybe somebody got irritated with a animal near their house and scared it away.”

That noise actually a gunshot around six Sunday morning in that St. Cloud neighborhood.

Police received a report that a man was shot while standing inside a doorway. They located 68-year-old Ed Ward inside the residence with gunshot wounds. He was transported to the St. Cloud hospital where he later died.

Ward’s daughter Amy Jones, who lives in Duluth, sent a statement to FOX 21 where she describes ward as an incredible man.

“We are shocked and saddened by the murder of our beloved Ed. He was a gentle, quiet, and intelligent man who served as professor at St. Cloud State University for over 30 years, where he impacted the lives and careers of countless students. He loved reading, bicycling, and history. Ed’s greatest love, however, was his family, and he leaves behind his two adult children, Amy and Mark, and his lifelong partner and mother of his children, Denese. We would like to thank everyone for their thoughts and prayers during this difficult time and ask that you respect our privacy.”

Meanwhile, as for the 45-year-old suspect, he was arrested less than an hour after the shooting police received a call that he was carrying a handgun while walking.

That man from Duluth was arrested without incident.

Police say he admitted to shooting Ward, and they believe the crime was random — that the suspect has no ties to the victim and/or the neighborhood where the crime took place.

“How can they call that a random shooting?” Levendowski said. “Ok? Why did he pick that house? Was it just because that was the only house that had the lights on?”

The suspect is being held at the Stearns County Jail on preliminary charges related to homicide.

FOX 21 will release his name when formal charges are filed with the county attorney’s office which could likely happen tomorrow.