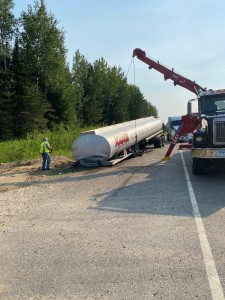 ELY, Minn.- Minnesota Highway 169 was shut down for six and a half hours Saturday due to a fire involving a semi tanker truck pulling gas, according to the Northland FireWire.

Morris-Fall Lake Fire Chief Ted Krueger told The Northland Fire Wire that the brakes of the truck caught fire and spread to the vehicle’s tires.

The truck driver was able to uncouple the burning vehicle from the tanker. The front of the tanker hit the ground, rupturing a pocket containing 3,400 gallons of gasoline.

Local road equipment was brought in to contain the spill and the remaining gasoline from the damaged tanker was transferred to another tanker.

No injuries were reported. The truck did receive extensive fire damage.

One Dead in Camper Fire Near Deer River