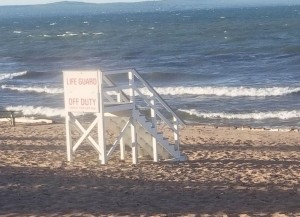 DULUTH, Minn. – A woman was hospitalized Wednesday evening after being pulled under the waters of Lake Superior by a rip current off Park Point.

The call for help came in around 7 p.m. near the Beach House at the end of the point.

When crews arrived, a 20-year-old woman from St. Paul was found on the shoreline after bystanders grabbed a life ring to help the woman back to the beach.

“Bystanders reported to Duluth Police that the woman had entered the water when her sister had gone in and was struggling. The woman was able to help her sister back to shore and was reported to have been pulled back out by a rip current,” according to Kate Van Daele, public information officer.

First responders, Duluth firefighters and police, along with the St. Louis County Rescue Squad assisted the woman to a Mayo Ambulance for observation at a local hospital.

The water emergency comes during a “dangerous swimming conditions warning,” which is in effect until 10 a.m. July 8.

“The Duluth Fire Department would again like to remind the public that rip currents can happen at any time, and should be taken seriously. Red flags fly in multiple locations along Park Point along with a message board that shares beach conditions when warnings are issued. Please keep yourself and others safe by not entering the water when these warning are issued regardless of your swimming experience,” Van Daele said.