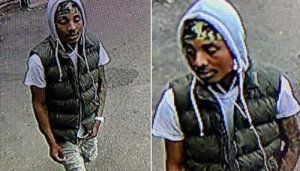 Surveillance images of Raeqwon Hawkins released by Superior Police Department before the arrest.

SUPERIOR, Wis. – We’re learning more about what all went down involving a June drive-by shooting in downtown Superior. 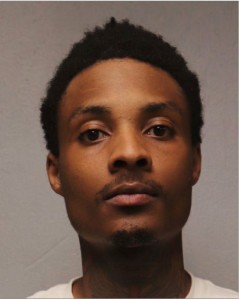 Raeqwon Jay Hawkins, 24, of Superior is now charged as being the shooter in the drive-by.

The crime happened around 10:40 p.m. June 17 in the heart of downtown Superior next to the public library building.

According the criminal complaint, Hawkins whipped a vehicle around at the intersection of Ogden Avenue and Belknap Street before pulling out a Glock 9mm handgun to fire one shot at another man who was confronting him on foot by throwing an e-cigarette at the vehicle.

The victim was not struck by the bullet.

Investigators say the mother of the victim’s child — from a former relationship — was in the back seat of the shooter’s vehicle at the time.

The shooting followed exchanges behind a bar on Tower Avenue.

Hawkins was arrested July 9 in Duluth after a vehicle was spotted in Superior and a brief chase moved over the Blatnik Bridge.   The investigator says he noticed the man in the passenger’s vehicle to be the suspect wanted in the drive-by shooting.

If convicted, Hawkins faces up to 12.6 years in prison for both felony charges against him, including “discharging a firearm from a vehicle – toward a person.”