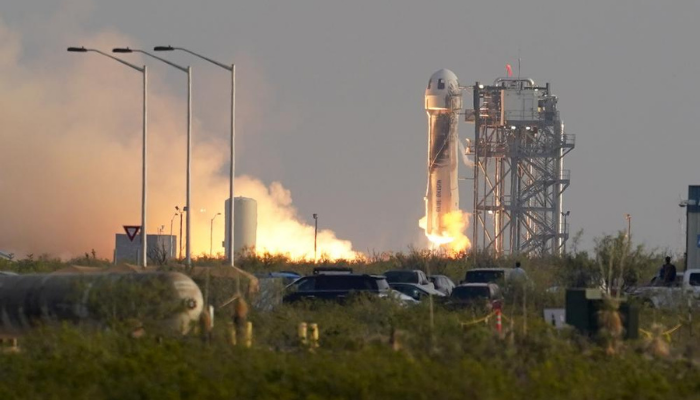 He’s the second billionaire in just over a week to ride his own spacecraft.

The Amazon founder soared to space with a hand-picked group in his Blue Origin capsule and landed 10 minutes later on the desert floor.

The passengers include Bezos’ younger brother, an 18-year-old from the Netherlands, and an 82-year-old aviation pioneer from the Dallas area.

They’re the youngest and oldest to ever hurtle off the planet.

Named after America’s first astronaut, the New Shepard rocket soared from West Texas on the 52nd anniversary of the Apollo 11 moon landing.

Unlike Branson’s piloted rocket plane, Bezos’ capsule was completely automated and required no official staff on board for the up-and-down flight.

Blue Origin reached an altitude of about 66 miles, more than 10 miles higher than Branson’s July 11 ride.

The 60-foot booster accelerated to Mach 3 or three times the speed of sound to get the capsule high enough, before separating and landing upright