Around 6 p.m. Friday evening, high winds snapped some trees and uprooted others which crashed down onto many tents and booths in Whiteside Park. There were no injuries reported.

ELY, Minn.- The 40th Blueberry Arts Festival in Ely was forced to cancel for the rest of the weekend Friday night, after severe thunderstorms with 60 to 70 mile per hour winds ripped through the town including the park where festivities were already set up.

“There wouldn’t have been a whole lot of show left for people to see if they did come up here to see it, because it seems like there was only one booth every 30 yards, something like that, that survived,” said Ryan Tischer, owner of Tischer Art Gallery whose booth remained unscathed, “it was pretty ugly.” 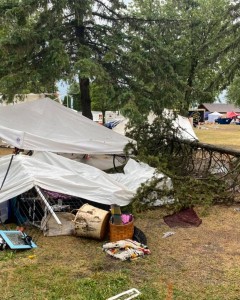 Around 6 p.m. Friday evening, high winds snapped some trees and uprooted others which crashed down onto many tents and booths in Whiteside Park. There were no injuries reported.

“You can see this canopy behind me is destroyed. So these are the remains of a bunch of canopies just kind of busted up and thrown in the dumpster,” said Tischer.

“You can see right there that one snapped right off and there’s the remains of the tree,” Tischer said, pointing out the wreckage. “Last night you could barely see that there had been a crushed booth underneath that tree.”

According to Ely Chamber Of Commerce Events Director Ellen Cashman, at least two thirds of the 220 vendors experienced damage, and the following power outages and more meant the festival couldn’t go on.

“You know how you’re sort of in a fog, like, you spin around and you look and you’re like well I can’t believe this even happened,” Cashman said. “This was the 40th Blueberry/Arts Festival and I don’t recall anything like this happening.”

Organizers had to break the news to some visitors once they reached the park Saturday morning. “There was no power, no cell phone service so we were quite hampered to even get the word out to everybody,” said Cashman.

For some local artists and vendors like Tischer, the Blueberry Festival is one of their more successful shows. 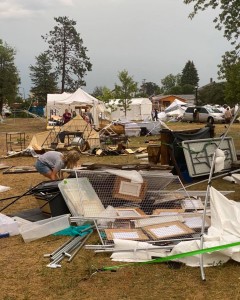 So losing it to the weather this year, and the pandemic last year is a tough blow – not to mention the property some others lost to the storm.

“I imagine there were a lot of artists who didn’t have insurance and so they lost their canopy, their display, all their artwork and that’s really tragic for them,” said Tischer.

But amid the destruction and despair, Tischer said it was enlightening to see residents of Ely coming out to aid police and fire in helping pick up the pieces.

“When things like this happen it seems like artists, really artists and the community come together and help one another,” he said, “and I saw a lot of that last night.”

On their Facebook page, the City of Ely says they will be waving all transient merchant and food truck licenses for the weekend.

According to Cashman, many vendors said they will return for the Ely’s Harvest Moon Festival in September.