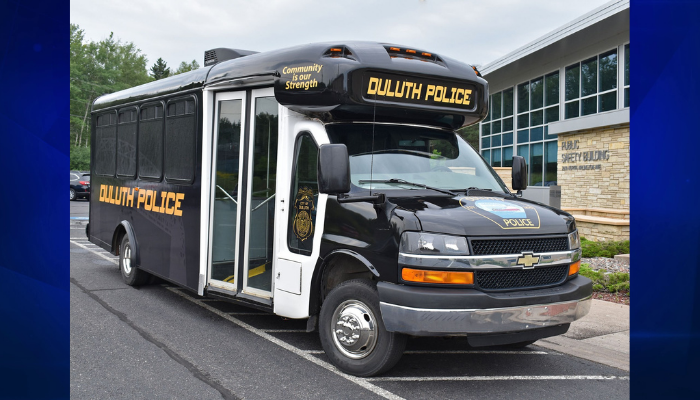 DULUTH, Minn. – The Duluth Police Department is rolling out a new community engagement bus just in time for National Night Out.

The police department says the bus was donated by the Duluth Transit Authority and was provided through the JAG Grant, which focuses on community policing initiatives.

“Since it’s a community engagement bus, we opened up naming it to the community,” said Chief Mike Tusken. “There were more than 350 people who weighed in on their favorite name. CODE4 received the majority of the public’s vote, so that’s the name of the bus.”

The police department says CODE4 will provide a “tasteful” way for the community to meet with officers.

Some of the ways the department will be using the bus in the community are by handing out ice cream treats to kids in the summer and stocking the bus with hot cocoa in the winter.

CODE4 will also be used during community events, as a recruitment tool, as an emergency shelter for evacuees, as a mobile break room for cops at special events, and much more.

“This bus is another tool in our toolbox that we can use to engage with the community in an innovative way,” said Officer James Forsyth. “Today’s the first day CODE4 will be hitting the road, going out to a few National Night Out events.”

For more information on the community bus, you’re encouraged to follow its journey on the Duluth Police Department’s social media pages with the hashtag #CODE4.

The bus will be staged at the Public Safety Building from Tuesday through Thursday.