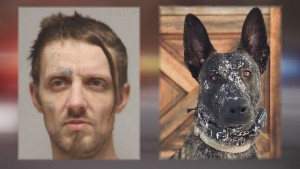 DULUTH, Minn.- The use of deadly force by officers who shot and killed a suspect involved in K9 Luna’s death has been ruled justified, according to the St. Louis County Attorney’s Office.

“Their actions taken in self-defense of themselves and each other, eventually resulted in the death of David Joseph Wayne Conwell. A later examination by the Midwest Medical Examiner’s Office on behalf of St. Louis County confirmed that he died of multiple gunshot wounds,” said County Attorney Mark Rubin about the February incident, that involved a standoff that lasted about 20 hours.

According to authorities, during the early stages of the standoff, Conwell shot and killed K9 Officer Luna. He then subsequently discharged his sawed-off shotgun three more times, despite continuing demands for him to show his hands, drop his weapon, and surrender.

The standoff ended when, while still holding his sawed-off shotgun in his hand and refusing to comply with any orders, Conwell was shot by both Sgt. Ben Fye
and Sgt. Miles Bruggman of the St. Louis County Sheriff’s Department.

“Peace officers have perhaps one of the most difficult and dangerously routine jobs in our society. Every day that an officer puts on their uniform and starts out on patrol, they are keenly aware that there is an increasing probability of coming face to face with a potentially deadly conflict. While they admirably train for and expect this reality and risk, their number one priority continues to be the safety of the citizens of our community that they are sworn to serve and protect,” said Rubin.